At the entrance to the Compass Garden is a small plaque beneath a Sycamore (Acer Pseudoplatanus). The plaque is inscribed with the statement that this was the first tree planted in Breenhold by Tom (Snr) in April 1965. Close to it is a striking Chinese Weeping Cypress (Fagus Sylvatica Pendula).

Enclosed by solid stone walls on three sides, the Compass Garden was established in the late 1960s as one of the several “gardens within a garden” at Breenhold. Its focal point is a small fountain in a basalt stone pool in the form of a cross with each arm aligning with the four points of the compass.

On its southern side the Garden has a tall hedge-wall of Bhutan Cypress (Cupressus Torulosa). Opposite is a beautiful Japanese Maple (Acer Japonica), which in Autumn, lights its space with vibrant deep red foliage. Beneath this tree, along the northern garden bed, is a mass of vibrantly flowering Clivia, a plant originating in South Africa.

The Clivia is named after Lady Charlotte Clive who was the Duchess of Northumberland (1787-1866). The duchess was the granddaughter of Robert Clive, known as Clive of India. Lady Charlotte, who became the governess of Queen Victoria, cultivated the first Clivia in England. 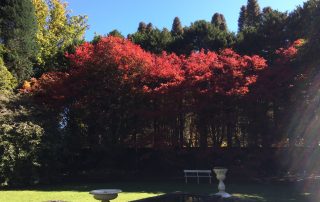 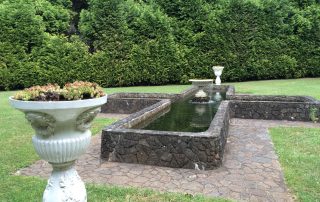 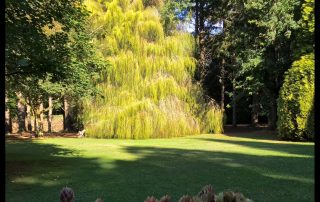 Back to Map
Page load link
Go to Top